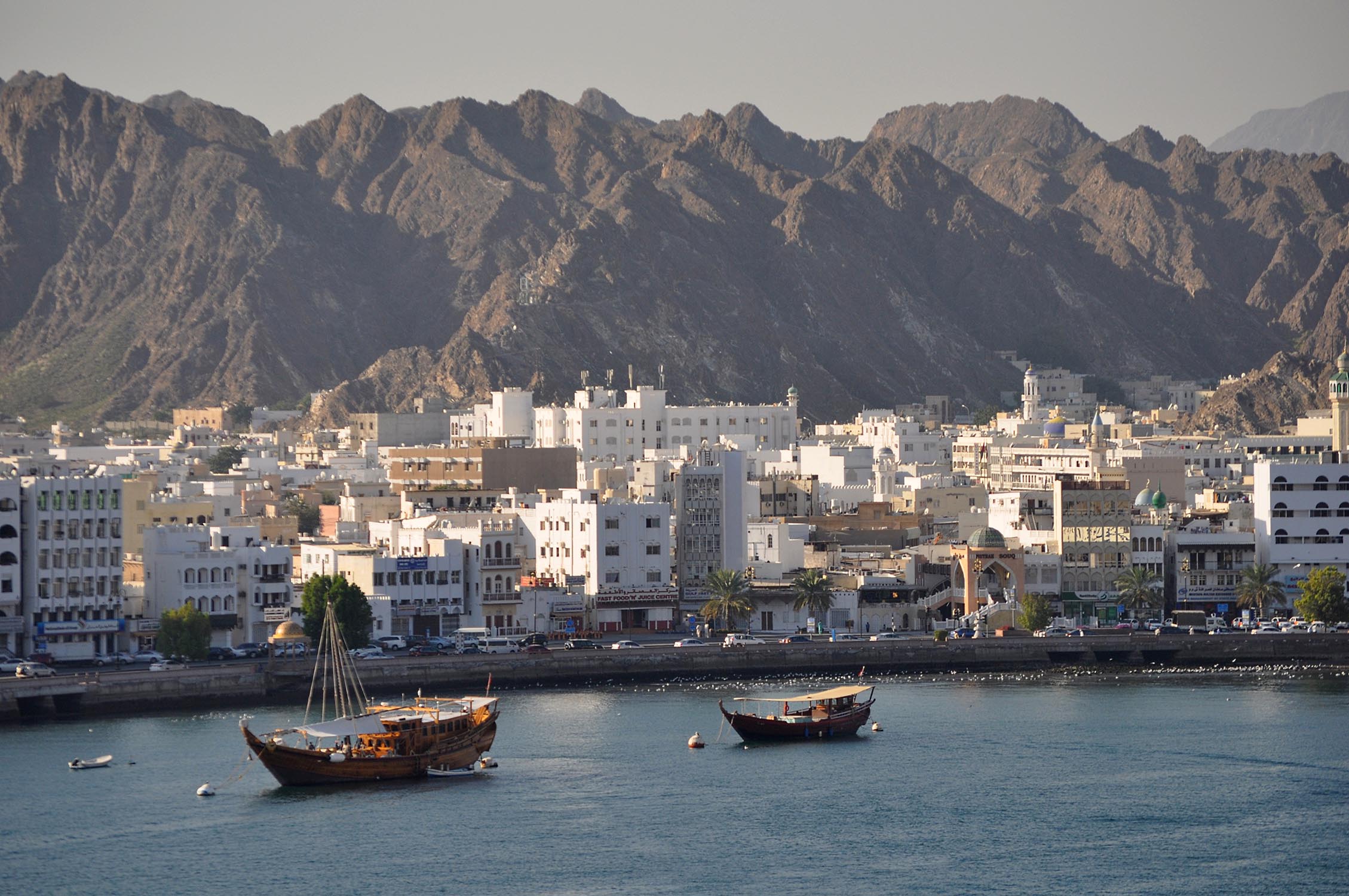 Oman is a sultanate in the southeast of the Arabian Peninsula and is after Saudi Arabia the largest country in Arabia. Oman borders the United Arab Emirates in the west and Yemen in the south. In the north, it borders the Gulf of Oman and in the east the Arabian Sea. The island of Masirah, the Kuria-Muria Islands, the uninhabited Daymaniyat Islands and the Maha lying in the emirate Fujairh belong to Oman. The total surface of the country is 300,000 square kilometers, around eight times the size of the Netherlands. The population in Oman is very diverse and about a quarter of the inhabitants are foreigners. The main religion is Islam.

The capital of Oman, Muscat, is also known as the white city. The currency in Oman is the Omani Rial and the official language is Arabic. Oman has two different seasons with a great difference in temperature between the north and south. In the winter, from November to March, it is warm, sunny and around 26 degrees Celsius. The summer months are hot and humid in desert areas. Temperatures can climb as high as 50 degrees Celsius in the desert areas while in the Hajar Mountains it can cool down to 5 degrees in winter.

Oman is an absolute monarchy and has been open for tourism since 1970. Oman is a popular holiday destination due to its diversity in landscape, the sincere friendliness of the inhabitants, and the ease of travel.

Muscat is Oman’s capital, characterized by its many white houses. Muscat is currently in a transitional phase where contemporary progress and ancient traditions form a fusion. Since the beginning of the first century, Muscat has been an important trade port between the east and the west. Over centuries, Muscat was ruled by several indigenous tribes and foreign powers such as the Portuguese and the Persians. Since Qaboos Bin Said was crowned as sultan, Muscat has experienced strong economic growth resulting in a multicultural society. Unfortunately, Sultan Qaboos Bin Said passed away in 2020 after a long illness. His cousin, Haitham al Said, takes his place as sultan.

The Sultan Qaboos Grand Mosque is a major landmark in Muscat. This full marble mosque is the third-largest mosque in the world with room for 20,000 people. In addition, this mosque is often open in the morning for non-Muslim tourists. For a history lesson about Muscat you can go to the Bait Al Baranda Museum. They tell a fascinating story about the 750-year-old history of the city with many interactive exhibitions. Mutrah Souq is Muscat’s most popular market. This traditional market is located in a maze of narrow alleys and market stalls. Immerse yourself in an Arab setting by visiting this market with many gold and silver jewellery, antiques, and traditional goods.

Looking for a refreshing dip? No problem, the city has many beaches!

Dhofar is a province in the South of Oman which covers a surface of ​​99,300 square kilometers, almost a third of the country. Dhofar is a beautiful mountainous area where you can still find old hill tribes with traditional clothing. The monsoon rain makes Dhofar green and lush. In the months of June to September, it is rain season and you will find a thick fog in the area. Dhofar is known for the export of incense, this scented resin is still extracted and traded from this part of Oman. Salalah is the most important town in Dhofar located on the Arabian Sea, about 1040 kilometers from Muscat. In this historic city, you can find many ruins of different civilizations. Not all of Salalah’s attractions are from the past, the city also contains beautiful beaches and steep mountainous landscapes. The rise of tourism in Oman makes Salalah an upcoming tourist attraction.

Nizwa is one of Oman’s largest cities, 165 kilometers from Muscat. Due to its central location, the city plays an important role in Oman’s history. Until the 12th century Nizwa even was the capital of Oman.

Although the city partly has lost its original state due to modernization, it now serves as the centre for trade, religion, art, and education. The Fort of Nizwa belongs to one of the oldest forts of the Sultanate. Dating back to the 17th century, this fort is an important reminder of the turbulent periods in Oman’s history. For a unique experience, the Friday morning market is an excellent attraction. At this weekly animal-market, traders from different places come to sell their animals.

During a trip through Oman, a visit to the Wahiba Sands desert may not be missed. The Wahiba Sands desert is located south of the capital Muscat. It is a unique experience to drive through the desert with a jeep, to enjoy the starry sky, or to climb the various sand dunes for stunning views. The reflection of the sun provides a game of light and shadows on the sand, the different colors of the sandhills give an impressive picture. If you want, you can ride a camel or even stay overnight in the desert. The Wahiba Sands desert is inhabited by the nomadic Bedouin, who gathers in Al-Mintirib’s souk on Fridays to do some shopping.

Our Most Popular Destinations